Intersafe Limited provide a range of electrical testing services to businesses, industry, schoolas and colleges:
Siteweave did not write the Intersafe web site but have hosted, maintained and updated the site for some years and have provided some search engine optimisation services

Posted by SiteWeave Hampshire Web Designers at 17:31 No comments: 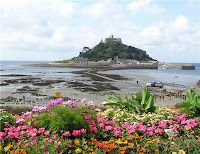 The Haven is a self catering, 3 bedroom semi-detached holiday home, tucked away from the road with just a footpath at the front leading to your private parking space. You can be at the causeway to St Michael's Mount in a couple of minutes and there's a wonderful sandy beach just moments from the front door.

There's plenty to do without needing the car including coastal walks, local art galleries and shops, pubs and restaurants. Marazion sea front is just a minutes walk from The Haven. It's a great place to stroll and look across the bay towards Newlyn and Mousehole in one direction and the Lizard Peninsular in the other. Marazion Marshes are well known for migrant and native bird watching. The beach also has a fenced children's playground.

The location is convenient for walking the South West Way and for cycling the country lanes. Broad expanses of golden sand slope gently to the waters edge. There are rock pools to explore and plenty of space for games.

The Haven is convenient for bus routes to Penzance and Falmouth and here is a mainline railway station at Penzance. Historic Penzance has a wide range of shops and facilities and several large supermarkets and the photo opposite shows the famous lighthouse at Penzance. Many National Trust and English Heritage properties can be found nearby.

The Haven web site was created by SiteWeave Internet Services LLP - providing Internet services to the Solent region- and beyond - for more than ten years!

Posted by SiteWeave Hampshire Web Designers at 13:55 No comments:

The inventor of Mouse Mesh, Tony Carr, has received the prestigious Gold Award at the Inventor of the Year show held at Alexandra Palace in London. Run by the British Inventors Society (BIS) the BIS event, held from 14-17 October 2009 attracted inventors from all over the world.

Tony and his mouse prevention products also featured in news of the BIS event on ITV's breakfast television progamme, GMTV. Presenter Matt Arnold spoke to Tony about his humane pest control invention which is gaining wide acceptance in buildings both in the UK and abroad.

The award also featured in Tony's local newspaper, the Musewell Hill Journal on the 4th November.

The MouseMesh web site was created by SiteWeave Internet Services LLP - creating, supporting and promoting web sites in Portsmouth and beyond for more than ten years.
Posted by SiteWeave Hampshire Web Designers at 10:51 No comments:

Avocet Training and SiteWeave web site of the Month for November

Avocet Training provide a range of First Aid and safety courses in the Solent area. They are nationally accredited first aid and health and safety training providers, offering companies, schools, institutions and individuals the following services:

Based near Fareham in Hampshire, Avocet Training is ideally placed to teach both maritime and shore-based first aid - being one of the few providers in the country to be accredited to the Health and Safety Executive and the Maritime Coastguard Agency for first aid training.

The Avocet Training web site was created and is supported by SiteWeave Internet Services LLP. Based in Portsmouth, SiteWeave have been creating, promoting and supporting web sites for companies in the Portsmouth for more than ten years.

Posted by SiteWeave Hampshire Web Designers at 13:54 No comments: